Creature from the Black Lagoon and Monster Bash are legendary tables, but I’ve barely gotten to play either. And that’s really weird because Creature from the Black Lagoon was in my family’s personal collection for years, but the fucking thing never worked. It was like everything that could go wrong did go wrong. Apparently whoever had it before us had issues with it too and in attempting to repair it (and also follow mod guides despite having no engineering background), he actually did more damage to it. In 2016, we traded it along with a few other tables that were, ahem, problematic for some working ones. I’d like to think the guy who ended up with ours went on to have wacky adventures with his Creature from the Black Lagoon table. Maybe he had to travel into the heart of the darkest jungle to retrieve the magical power supply or replacement ROMs to get it running. Maybe it was like that frog from those Looney Tunes shorts and it drove him to the streets, just him and his broken table. Maybe we’ll be reunited someday and it’ll fail to register targets for old time’s sake. Or maybe I’ll just get another off Craigslist. One that’s been fully cleaned and shopped wink wink. You’re not actually supposed to type wink wink in a Craigslist ad but, God, it would be so helpful if sellers did.

Or, I can skip all that shit and just buy the Pinball FX 3 Universal Monsters Pack for $9.99 and enjoy my 99.9% discount on a real table.

UPDATE: My father found the gentleman we traded our Creature from the Black Lagoon to. The table was fully restored and sold to an owner who was very happy to get it. Aww, I always tear up for happy endings. 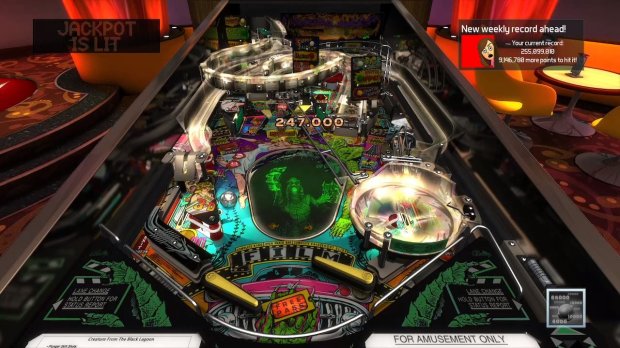 Yes, yes, the hologram is there and works like a hypothetical working table would. I’m convinced it’s the sole reason the table is “legendary” because the gameplay is just alright.

By the way, Creature from the Black Lagoon, the actual pinball machine, is one of the most notoriously difficult tables to repair. In-part because getting replacement parts for faulty components is difficult. ESPECIALLY if you’re anal about “authentic parts”. The famous green hologram on the table? Yeah, it wasn’t made to still work decades later and many have since rotted into an non-functional sludge-blue. But hell, even replica parts can run you hundreds of dollars, and those parts don’t install themselves. There’s entire guides dedicated to do-it-yourself replacement kits and work-arounds and modifications and homemade solutions just for this table. If you genuinely love this Creature from the Black Lagoon pinball but lack any semblance of engineering skills, you’d be a fool to spend the thousands of dollars (hell, up to $15,000!) on a real Black Lagoon pinball table (or ANY real table, because ALL need repairs at some point). Even if you got a mint condition, rarely (if ever) routed table, it’ll eventually break down. You’ll need to fix it, and if you can’t, you’re stuck with a gorgeous but large and expensive paperweight. Hell, my Dad DOES have engineering skills and still couldn’t fix ours. Shit, $9.99 for a very well-made digital approximation of the same table is sounding pretty fucking sweet right about now.

It’s worth noting that Creature from the Black Lagoon is hardly alone in being a white elephant. I can’t stress enough to people who’ve imagined owning a real pinball machine of their own: unless you’re truly passionate about it, don’t do it. Stick to recreations. Go to Craigslist and look at all the non-professional dealers selling their tables. They were you once.

Anyway, we have two new Pinball FX 3 tables released in time for Halloween that required the Universal license, which Zen Studios already had. They have a set based on Jurassic Park and another based on miscellaneous Universal movies ET, Back to the Future, and Jaws. I was hoping for a fourth table based on Schindler’s List. Or, maybe one based around Sid Sheinberg’s ego, but it’d probably require a 200GB file size. There really were tables based around Back to the Future and Jurassic Park, but those were done by Data East and Sega Pinball, both of which still exist today as the modern Stern, which has a deal with Pinball Arcade. So, sadly, it’s unlikely we’ll see them recreated anytime soon.

And the sadness continues, as two tables that would have fit perfectly with the theme that were hypothetically available (they were by Midway under the Bally license) couldn’t be used. 80s B-Movie hostess Elvira is actually something of a legend in pinball circles because she was the theme of two iconic pins: Elvira and the Party Monsters and Scared Stiff. I think Party Monsters (which, believe it or not, was digitally recreated for Atari Lynx) was a little overrated while Scared Stiff is every bit as deserving of its reputation (and wallet-busting $8K – $11K price-tag on the second-hand market) as it gets. However, Elvira signed on to do a third table with Stern recently, and Stern is partnered with FarSight Studios to do The Pinball Arcade/Stern Pinball Arcade. I prefer Pinball FX 3 to FarSight’s pinball engine, but I really just want these tables recreated regardless. Maybe the two companies can work out some kind of trade: the 90s Universal tables (Back to the Future/Jurassic Park) for the two Elvira tables. Call me guys. I’ll negotiate it for you.

Monster Bash is a truly fun, thrilling table and a great way to introduce players to stacking modes. It’s a table that feels like a last-hurrah for the golden age of solid-state pinball.

So, two tables for $9.99. Is it worth it? Well, frankly, Monster Bash is worth it by itself. It’s the best of the recreated Williams tables I’ve played yet. Creature from the Black Lagoon is vastly overrated historically. Which is not to say it’s bad. Overrated doesn’t mean bad. It means overrated. It’s not an all-timer. It’s just a solid, maddening table that simply has one of the best themes in pinball history: a loving tribute to Drive-Ins. It’s also the work of a truly reprehensible human being, so your mileage may vary on how much enjoyment you can get out of it. I’ll be giving full reviews to the tables by themselves in an upcoming Indie Pinball Chick post that rates and ranks all fifteen Williams tables in Pinball FX 3. Until then, just know that I absolutely recommend this set because both tables are worth preserving and fun. Creature from the Black Lagoon, for its extreme difficulty, is still alright. Monster Bash, on the other hand, is absolutely deserving of its legendary status. I look at the Universal Monsters Pack as paying $10 for Monster Bash and getting Creature from the Black Lagoon as a throw-in bonus with it. And hey, at least their version works!

$9.99 did the Monster Mash in the making of this review.

A review code for the Switch version was supplied by Zen Studios. We bought it on Xbox One.